Woah howler monkeys! As we drank our coffee and after I did some jungle porch yoga, we exchanged tales of the screeching monkeys that woke us at 3 am. Two males must have been quarreling over something because the noise filled the whole jungle! Adventures in Belize continued for day 2!

Lucy arrived with her little girl Chloe and while we chatted with Chloe, Lucy cooked up a scrumptious omelet with a side of pineapple. We were fueled to set forth on our pontoon adventure where we’d float, hike and explore the jungle. Laz, the captain of the pontoon boat was Lucy’s brother, his first mate, Milly, her sister and the skipper, Dennis, their cousin. A true family affair. As we drove down to the boat, we passed some of the Martinez family homes – Lucy’s mom and dad had 14 children, all living on the thousand acres the family inherited from the government back in the 1940’s. Milly’s home stood on stills and was made of gorgeous mahogany wood. Mike marveled at the beautiful Tropical wood they used for building. Laz explained he had killed his own wood, carried it on his back, built the home with his two hands. Milly had as well. “I always knew I wanted my own home. It’s humble, but it’s mine,” Milly explained proudly. The boat doc was at the end of a bumpy road, past Laz’s, Lucy’s and Milly’s house. A pirates flag flew proudly so we knew we were in for a fun day. 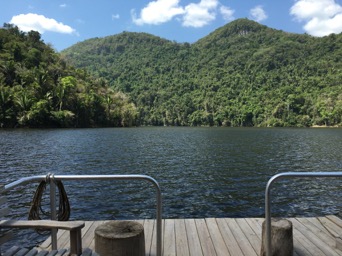 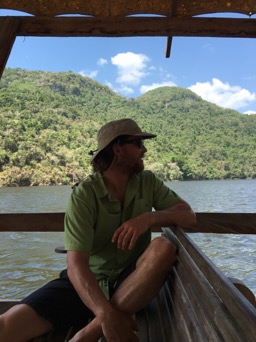 As we floated down the River, the family pointed out different foliage, explaining the symbiotic relationships with certain plants and trees. Small fly catchers, a king fishers, kites, swallows and a white hawk were spotted throughout the day, flying high above or close to the water, scooping up fish. At one point, we even saw a male iguana sunning himself on a rock. 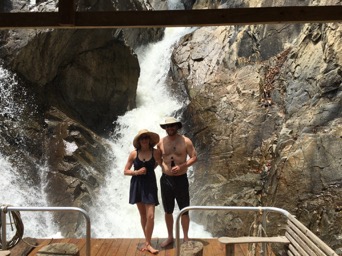 The first stop had twin waterfalls and as we docked on the rocks the sheer force of the water could be heard, even though it couldn’t be seen. Dennis let us know we needed our hiking shoes for this leg of the journey because we were hiking straight up the side of one of the waterfalls (or at least it seemed like that!). Once we made it up, grabbing on twisted vines and digging our shoes into rocks, we arrived at a small campground area where the family explained they offer overnight camping accommodations for those that want it. Milly led us down a short trail to a hidden Dipping pool surrounded by jungle and rocks. Heaven!

We swam and swam, relishing in the relief the water gave. Upstream we climbed and played on the rocks that formed small rapids and hopped into the pools between them. Dennis and Milly spoke of their adventures in guiding and past guests they had had. We hoped we stacked up!

The crew was full of wisdom and we chatted about politics, the unrest between Guatemala and Belize, the fact that neither Milly nor Laz wanted children, building homes from scratch, hard work and people in general. Laz sai, “People today don’t live to survive, they live to be comfortable.” I thought this was a very true statement.

After the glorious swimming we boarded the pontoon boat and headed straight into the waterfall, getting sprayed by the downspout, making a great photo opportunity. Our lunch spot consisted of pulling the pontoon boat over to the side of the river bank, where the granite shot straight up. We tied up and unwrapped the treasure Lucy had prepared for us: stuffed fried jack sandwiches, fresh pineapple, belikin beer and chocolate chip banana bread for dessert. Hit the spot!

Our river adventure wasn’t over yet, so we mosied on, enjoying the breeze. Two floats tied to the back of the boat were thrown over and Mike and I jumped into the inner tubes to troll the river. Thinking little of the crocodiles that were in the river, we lounged lazily while the pontoon boat pulled us along. I felt like a mixture of Huck Finn & a jungle princess. 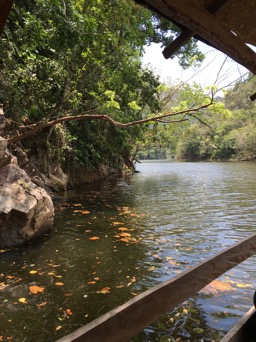 After we had out fill of trolling, we swam back onto the boat and headed toward the next stop: Rio Frio falls. A short hike (much less strenuous than the last) and we arrived an a perfectly pristine swimming hole that had a gorgeous waterfall spewing into it. This water was quite a bit colder than the previous spot, hence the Rio Frio. The waterfall held water from the mountain pine region, just several miles from the spot. It felt glorious after all the sun we had gotten so we let the falls pound on our heads and shoulders. Jumping from the rocks, splashing into the cold pool, we felt like kids!

After the waterfall swimming, we hiked out boarded the boat and made our lazy way back to the dock. The day had been glorious, a jungle experience we all were sure to remember for a lifetime, complete with botanical teachings, birding, iguana spotting, waterfall sighting, hiking, and pontooning. Amazing!

Dinner was ready when we arrived with fresh belikin beer from town, and the fresh prawns, red potatoes and salad tasted delicious after the adventurous day we had. Only two days in Belieze and we felt like we had experienced so much culture, nature and fun. To bed to prepare for day three!

2 thoughts on “Adventures in Belize: Day 2”