On June 6th, we purchased our 6th investment in Colorado and it’s been smooth sailing, for the most part, since. I’m going to try and document the steps, journey, pitfalls and forward motion of our investment.

The last two weeks have been full of windows, dumpsters, sub-contractors coming and assessing HVAC, electric, structural engineering (for the one wall we’re going to remove in the kitchen), attic adventures and cleaning up demo. Sounds familiar.….but here’s what we’ve been up to.

Mike has removed 14 windows, framed out every single one so that the new windows will fit well (basically, doing it the right way instead of rigging something super ghetto & shady). The old aluminum frames are extremely difficult to remove, and he’s often broken the glass windows trying to tap, tap, tap them out. As an experiment, we’re saving all of the aluminum to take to the scrap yard to see how much we’ll get in return. Problem is, the scrap yard won’t take the frames with glass, so we’ve decided to just return the screens and windows without glass, so we don’t slice ourselves to ribbons or waste precious time smashing glass. We’ll see if it’s worth it in the end.

Two weeks ago, we had a donation center come and gather all the lovely items we found in the house that we didn’t want to throw out, but definitely didn’t want. Well, in the last two weeks, I’ve spent a lot of time in the attic and cleared out quite a bit more. We’ve taken two loads of books to our Arvada used book store & there are still two more boxes I pulled from the attic this week. I’ve pulled out more toys, old blankets, weird car parts, old shoes & clothes, vases, old pictures and documents…enough to fill up quite a bit in the dumpster!

I’ve also been deemed cleanup crew, per usual, and have swept up dust, lugged garbage cans full of window sill, carried out the window carnage, and vacuumed up the remaining particles after Mike guts out the windows. Thank goodness for dust masks!

A few other smaller bits to mention….

Some things that aren’t going great or I’m a bit worried about…. 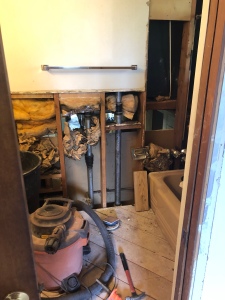 For a project this size, where we’re pretty much demoing every room, on a house that hasn’t been touched in 50+ years, I still feel like the project is going well and am super excited about the progress!

Cheers to the weekend!