Chrissy wanted to be where the wild things were….

Something mystical surrounded her…..a magic covering of sorts, that would envelop you when close to her.

And she always pulled you in close…

The concrete world held little for her – she sought relief in the sun, took solace near the everglades, letting the palms hug her near. Though she melted into this tropical paradise, she was never reclusive….

She took those she loved into the jungle…..where beasts howled for her, were tamed by her presence, and followed her home. 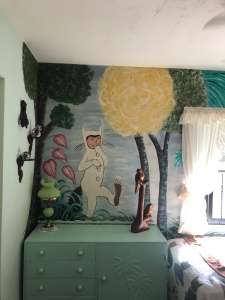 She invited us into her adventure…..unlocking her treasure trove, so we could drip with her jewels, playing in the shadows of the foreign lands she had visited. These borrowed treasures never felt as such – it was as if they were our own.

This vine enveloped world she created extended far, reaching all the way to the north, and we craved to be in her world. A world where mermaids swam above her, where Dragons circled round her, drawn to her fiery being, snuggling their scaly bodies close to her warmth. 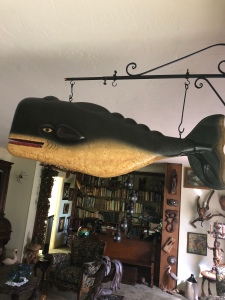 Her magic traveled near and far, captured with brush strokes, woven into fabric her loved ones would wrap around themselves when the cold crept in. The sun and Florida moon could be felt in these gifts. Her well of mystique ran deep, rooted in histories uncovered by her curiosity. She must have heard whale songs and train whistles, for she told the history of those who came before us clear as day.

Her credo was clear: Are you spending each day in a way that makes you happy? If not, make a new plan and change your life.

She embodied this, lived her way, loved and gave with every color in her soul. And now, she gets to swim among the creatures she brought to life for the rest of us. Gets to roam  and be Where the Wild things are.

To my aunt Chris, who gave with all of herself to those she loved. May you rest in peace and be forever happy.

One thought on “My Aunt Chris, The Dragon Lady”