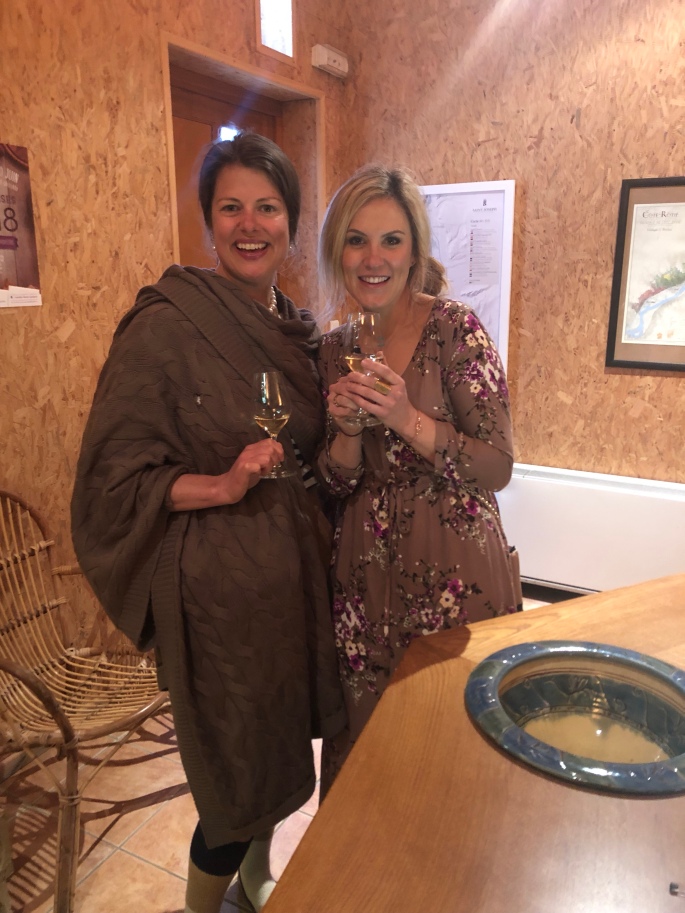 After a not so great night of sleep (Mike couldn’t contain his excitement so had a bit too much to drink and snored a lot!) we awoke at eight a.m., fell back asleep till 10 a.m. and got woken by our friends who had already been awake, had a hike and had wonderful crepes. How embarrassed was I to have slept so late! Day one had been a long day though, so guess one late morning was ok!  After amazing coffee made by our host Katherine, the best fried egg I’ve ever had, and some French cheese, baguette, and homemade jam, we quickly changed and formulated a plan.

Unfortunately our vans gear shift had massive problems and was actually leaking, so it had to be towed from our bed and breakfast near Malleval so Kieran and Kristie had to take a taxi back into Lyon to get a new one. What a pain! Our hosts were kind enough to let us use their vehicle, so Dusty, Holly Mike and I headed into Pelussin to explore the market and small town.

The small town of Pelussin provided gorgeous French scenery and proved to be the quintessential European spot. Every Sunday they had a small market in the center, which we were able to catch the tail end of. Fresh flowers, produce, farm stand items were on display. It was a lovely concept to wander amongst the local goods, converse with your neighbors, be outside on a gorgeous French day. At the west end of the square was a small church we were able to peek into.

The four of us meandered around the quaint town for the whole afternoon, ducking down avenues lined with old stone buildings. We wandered into a French cemetery where the old tombstones held the names of family members dating back to the 1800’s. Raised tombs overlooking Mont Blanche was not a bad resting place. The views were breathtaking!

We followed the narrow streets down to a park, where we saw cute French pups playing in the courtyard. Dusty even threw a stick for the bigger pup. Our strolling had left us hungry, so we walked the steep streets back to the city center. The pizza place we had tried to eat in the previous night was open and the al fresco seating was delicious, with the warm French sun beating down on us. It was phenomenal!

Holly and I saved seats while the boys went inside to order. Or so we thought! They came out with beers, letting us know they had told the waitress “dealers choice” because all the pizzas looked amazing! Don’t think the translation was there, because 10 minutes later the actual chef came out to take our actual order….and dealers choice wasn’t on the menu! 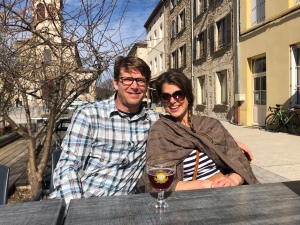 After what may have been the best, cheesiest pizza ever, we headed back to the house to get ready for our wine tasting. But first, we drove to a foot bridge we saw from a distance and walked across to see how the village looked hundreds of years earlier. The view from the top was spectacular and we immediately realized we could have gotten there from walking through the town earlier. She la vie! Now, back to the house to meet the Robinsons to head to their wine makers dinner. 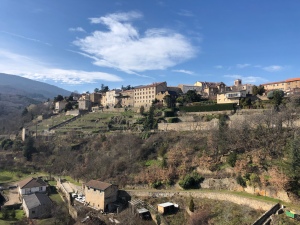 Kieran and Kristie had lived in the Rhone Valley in 2015 for almost a year, where Kieran interned with Pierre Gaillard learning the ins and outs of Syrah. For Kieran’s 40th, he wanted to go back and revisit the valley. And what an absolutely unforgettable night!

We pulled in to the property and parked in the vineyards production area, where they had equipment, hoses, machinery. We walked up the stairs into the tasting room, didn’t see Pierre, so walked across the street to their home, which was a converted barn. Pierre and his wife Pascal were in the quaint kitchen, which had a back patio that overlooked the vineyards. Kisses on both cheeks were given, as the wine maker and apprentice reunited after over thirteen years. 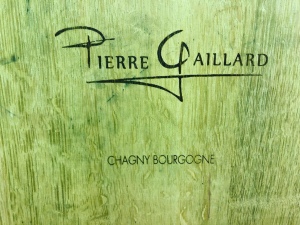 As we walked, Pierre answered our many questions. He explained the history of his start. One of the first wine makers in the region after the First World War, due to the rough, hilly, landscape, he planted himself in the Rhone Valley in the beginning of the 80s and some of his vines were more than 50 years old.

When Piere first got here, he had to excavate the wild growth of the Appalachia, one of the first tasks was to create paths to take the grapes into the village, carving ways up and out of the hill. When asked about the steepness, he explained you can’t plant vines steeper than a 70 pitch and they plant on the side of the hill to protect the grapes from the north wind.

He went on, passionately describing that Syrah was born here, the parents of two grapes born at the beginning of the 17th centuRy. They trim at the end of July and the strong winds are why they tie the vines together. When we asked about the water setup, he told us there’s a rule that if you have a vineyard in Appalachia’s you’re not allowed to have irrigation, you must rely on the weather.

The tour took us down a steep hillside, where views of Malleval took our breath away. The small vineyard below Piere belong to Gerard DePardue, a famous actor apparently.

Slowly, as the sun sank a bit lower, we walked up to the house where there were 100 year old vines once plowed by horse. Pierre’s vineyard produces 500,000 bottles a year, such an impressive operation. And to get a private tour from the owner himself was unforgettable.

The vineyard tour was over, so we headed into the tasting room, where a four hour wine tasting commenced. The first several bottles were of the white variety, the very first being a Chardonnay, made in the Roman style (grape stomping, no suffer, just pure fruit) followed by a roussane made in neutral oak (meaning it’s a used barrel) followed by several viogniers.

The fifth taste was a dessert wine made from the same grape, just a later harvest. So interesting how such a variety of tastes can come from the same fruit!

When asked what was his favorite, he smiled and said, “I like them all. I started making these not because my parents or grandparents but because I have a passion for them. I love them.” What a role model for us all; do what you love and you’ll never work a day in your life.

The wine flowed upstairs until it was time to desend into the barrel room, where Pierre siphoned wine into our glasses. Barrel after barrel, we tasted the mans delicious wine, the most elaborate tasting I had ever been to by far. 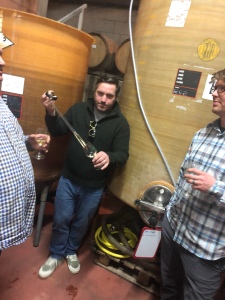 Some of his distributors joined halfway through, a French lot who knew the business. We tasted and spit into the drains in the floor, tasted and spit, and often swallowed because it was delicious!

Finally, after four hours, we finished our tasting and headed into the house portion for a homemade dinner made by Pascal. More wine was open, we helped set the table, and the eleven of us sat to dine. Gorgeous salads with grapefruit and avocado was served, followed by a dinner of baked truffle mashed potatoes and roast. While I skipped on the meat, the bread, potatoes, salad, and atmosphere was phenomenal.

The experience was one I’ll never forget…Generosity and passion were lessons I took away from the day. Share what you love with the people around you and you will have a good life!